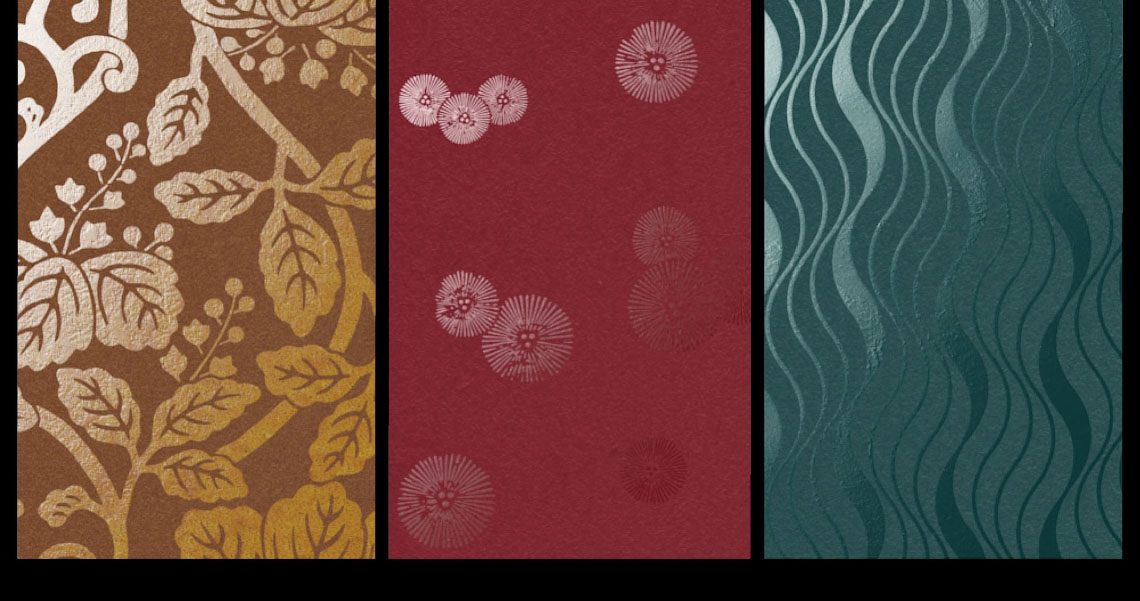 What is URUSHI KARAKAMI ?
As is said to derive from the word Uruwashi (graceful) or Uruoshi (moisturized), URUSHI has the unique soft texture and beautiful color and gloss. URUSHI KARAKAMI was developed as a new material for wallpaper having patterns with deep gloss unique to URUSHI by combining URUSHI with traditional skills to craft KARAKAMI. Glossy patterns provide a brilliant contrast to the mat texture of WASHI. Uneven hue of patterns seen through the color and gloss of URUSHI appears different for each sheet, creating an atmosphere of dignity and elegance in a space. As color and gloss of URUSHI become brighter due to increase in transparency over time, the color of patterns on KARAKAMI gradually shows up through the gloss of URUSHI, providing a gradual change in appearance. This texture can only be achieved by hand work. We accept an order for URUSHI KARAKAMI of your favorite patterns and hue of URUSHI with minimum of one sheet. 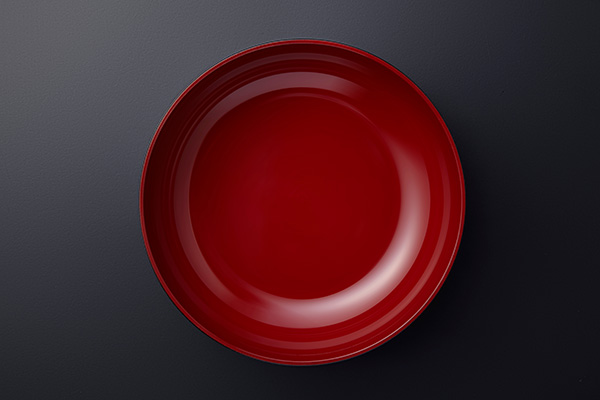 Urushi is a Japanese traditional natural lacquer. Unlike chemical lacquer, Urushi is the natural sap collected from the Urushi tree. It doesn’t contain any hazardous substances or toxicity so it is friendly to the environment and to humans.

How to collect Urushi sap lacquer
Urushi is the sap exuded from the Urushi lacquer tree. The tree yields this milky-white sap to heal wounds (a broken branch or damage by insects or animals). If the sap is not removed immediately, the resin becomes dark and hardens over time, like human blood. The Urushi tree protects itself with its resin. Exploiting this natural process, one scratches little by little the bark of the tree to obtain the Urushi sap during the period from June to November. Approximately 200g of sap can be collected during that period from a 14 to 15 year-old tree, enough to lacquer ten soup bowls. Once a certain quantity of sap is lost, the tree dies and is cut down in autumn. A new tree grows out of the stub of the old tree the following spring, renewing the process. The Urushi sap-scratching artisans have a saying “seven drops of Urushi is one drop of blood” so they take good care of the trees.

Characteristics of Urushi
Unlike paint which dries by evaporation, Urushi dries by a chemical reaction which provokes hardening by oxidation with moisture from the air and polymerization. The appropriate temperature (15 – 20 degrees C) and humidity (70 – 90%) are necessary to provoke this reaction. Under these conditions urushiol and laccase, components of Urushi, react chemically to generate a coating film. Once hardened it becomes a tough coating, very resistant to high heat and to the action of acid, alkali and alcohol. The drying process may require from a few to a dozen hours. If the correct conditions of temperature and humidity are not met, it may take more than one month to dry. That is why it is much easier to dry the Urushi lacquer in the humid rainy season than in the dry winter season. After each application the object is placed in a special drying cabinet which maintains a temperature and relative humidity appropriate for the proper hardening of the lacquer. This requires great experience and skill. Due to these conditions, the drying process is much more complicated than the painting process. It may also affect the quality of the coating, such as its color and brilliance.  Normally, with paint, deterioration can be observed immediately after the painting is finished whereas Urushi’s rich, smooth, beautiful coating will intensify in brilliance and color with time.
Urushi in Japan

Initially Urushi was used as an adhesive for weapons and implements used in hunting. Later Urushi lacquer was developed as a coating for decorative objects, adding creativity and refinement to the advantages of its protective and resistant nature. It is said that the word URUSHI was derived from the words “URUWASHI – meaning beautiful” and “URUOSHI – meaning moisture” because of the shininess of its surface. The Chinese character representing the word “Urushi” contains symbols for water, tree and man, which explain well the characteristics of Urushi. Urushi’s unique texture and brilliance match the Japanese people’s sense of beauty which led them to develop Urushi lacquer ware. Through its long history Urushi lacquer ware has fascinated not only the Japanese people but also many people around the world.
In English lacquer ware is called “japan” (like ceramic ware is called china), reflecting the history of Urushi lacquer ware in Europe as one of the most typical objects imported from Japan. Even today Urushi lacquer ware and lacquer crafts are one of the most representative traditional cultural objects of Japan.